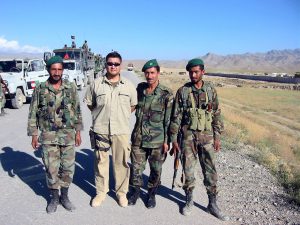 As a US Marine, we’re no strangers to living life to the fullest… and that’s what I did.  After 15 years, I decided to leave the US Marine Corps.

I was scheduled to go to Iraq after several months of being back from Afghanistan.  My girlfriend at the time said that she wouldn’t wait for me and I sensed that she wasn’t pro-military either.  But nevertheless, all I ever wanted was to have a family.  I’ve been deployed so many times and I’ve seen so many Marines being greeted with hugs and kisses when coming back from a deployment – I just wanted that sense of family and that someone actually looked forward to seeing me.  Nevertheless, I’d go back to the same routine and do one-night-stands and it was getting old.  I wanted something more.  To make a long story short – I became one of the stories you hear about a Marine throwing his career away for a piece.

Fast forward almost a decade later and i’m going through a very terrible divorce.  I lost my house, car, and family.  The pastor I confided in was seeing my wife while I was out of town, my soon to be ex frequently called the sheriff’s deputies on me telling them I was violent and abusive.  She even got my sister (who hates me with a passion) to lie about me and say that I was a violent person.  She used my MOS against me by telling the cops, judges, and anyone that would listen by telling them I’ve hurt people because I was an interrogator in the Marine Corps…. things were not looking up.  I wanted to just end my life.

She led me to believe that we could reconcile once we moved out of Texas and that we would stay at my mothers house.  But the day before I got home, she had packed up and left again.  My mother had cancer, and I was taking care of her.  But the stupid cancer spread too quickly.  My mother passed away several months later.  How could things get any worse?  Well, I couldn’t travel anymore because I had physical custody of my two beautiful children.  I eventually got laid off from my consulting work and was unemployed for almost a year.  I really wanted to end things but my kids reminded me with their smile that they are still with me.  I started to realize that my life was no longer about me, but it was about my children now.  I had to be a dad for them.  It’s been a learning process and sometimes progress is at a standstill.  BUT, my mother had a lot of prayer stored up for me and by God’s grace, he helped me find a way.  It wasn’t all divine but practical.  By practical, I mean that I would receive a message that was right for the moment and it re-focused my mind on what really matters most, my children.

I’ve compiled a list of videos and I want you to listen to these videos all the way through.  Listen to them multiple times.  Then listen to them again until it hits home and your way of thinking has changed.  It definitely has changed my outlook on life.  Listen to these while running, driving, cooking, or cleaning.  And if you have children, they may pick up a thing or two like my children did.  All I can say is; you are worthy of life.  You are worthy.  You matter, regardless of how negative you see yourself.  Shake yourself out of it long enough to listen to these videos.  Go through them before you do anything stupid.  You deserve to know the truth about yourself.

Les Brown – Listen to these first

This site uses Akismet to reduce spam. Learn how your comment data is processed.